I am going to talk about my last journey.

Two years ago I have been in Thailand for a month and half with my wife.

We were in twelve cities. In all of them we rented a motorbike to visit places, except in bankog. There, it was mandatory driving in the left lane and it was a bit dangerous. We visited gardens, museums, palaces, temples, festivals, waterfalls and markets.

For instance, we were in the Mae Klong Rail Way Market. It is long and narrow. It has a track in the middle where the train pass across every three hours.

Once I was in a market looking at insects such as worms, spiders, cockroaches, scorpions etc. they were selling as food. A woman came with her little daughter. The daugther asked for fried crickets and the mother bought them for her. Looking at the child I asked myself, «Am I less than this child, am I not Basque? I bought a bag of crickets and they were good, sweet and crunchy. Other time, in a floating market I ate crocodile meat, it taste like chicken.

We also visited temples. Catholic churches have mostly sad figures. In Buddhist temples, however, the figures have almost closed eyes and a Mona Lisa’s like smile. In three different Buddhist temples a monk put me a bracelet to have good luck. I don’t believe them but I am wearing them because they smell like holidays. Hindu temples are the ones I like the most. They are rare and cool. In one of them they worship thirty million gods.

One day I went alone to watch Muay Thay or Thay boxing, because my wife doesn’t like it. I watch to ten fights, two of the figths were between women. They ended very quickly because they were over before the third round. Remarkably nine of them ended in KO.

On the other hand we spent 5 days in Bangkok. Bangkok has twelve million inhabitants, and there we moved on foot, by train, by bus and by boat through the canals. In the canals we saw varans swimming. Varans are similar to iguanas but can be two and a half metres long and weight sixty kilos.

Bangkok is such a caothic city that we were not brave enohgt to rent a motorbike so once we took tuktuk, a kind of motorbike with a small platform in the back. I hate tuktuk because you have to bargain with the driver. He was going laughing and singing while driving among cars. Suddenly we saw a red traffic light in front of us, there were two lanes of stopped cars and a narrow space between them. We were going very fast and I shouted to the driver: Stop, stop, we can’t pass. He turned his head at us, increased the speed and shouted. HHHEEEEEEEAAAAAAA! We incredibly passed between the cars without touching them crossed the red light. And nothing happend!

Finally, we spent ten days on two islands. We used to go snorkelling to see tropical fish and coral of many shapes and colours. My wife told me that she was afraid of sea monsters and I told her: Yes honey, monsters live in the sea, such as huge squids. But they live in cold water and about four or five kilometres deep, but here the water is warm and only two or three metres deep. We swam holding hands, slowly, enjoying it, for about two hours and when we came out of the water our hands used to be wrinkled. Now she loves snorkelling with me, always holding hands because there live the monsters.p>

Conclusion: We enjoyed this journey so much. We love Southeast Asia because it is amazing, exotic, beautiful, cheap and the people are very friendly. I highly recommend you to visit it. When we can, we will go to Indonesia.

I have told this text in class in front of my classmates. I am an English student at the Official Language School of Donostia and I am at level B1. 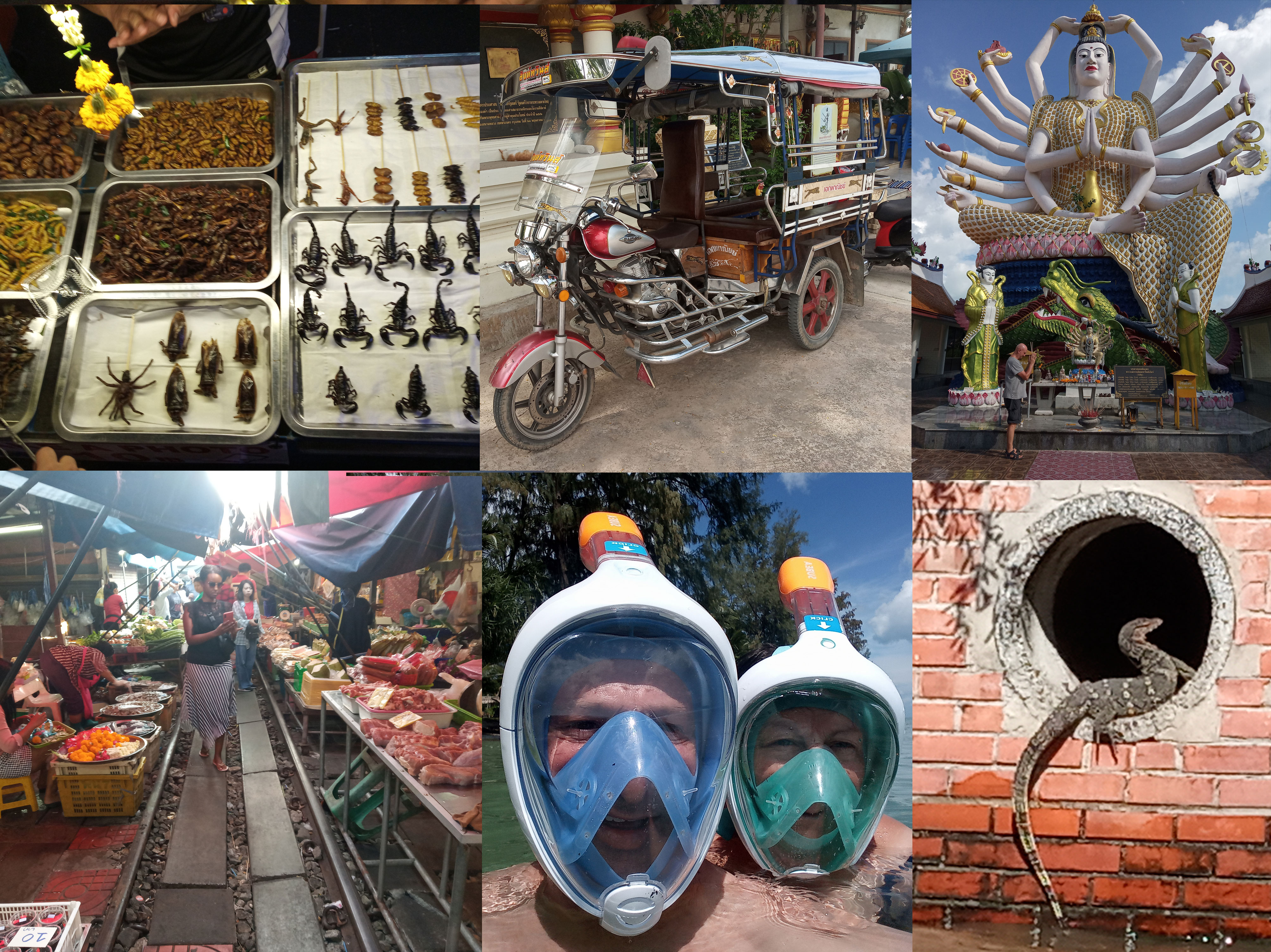 That goddess with eighteen arms is Lady Monk. At the bottom of the goddess I am offering incense for my bunch of friends to have good luck. I don’t believe in her but it’s a nice picture for sending to my friends via whatsaap.